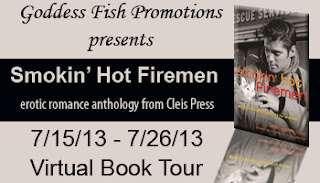 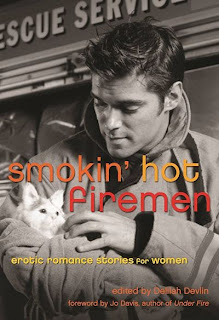 Who can melt any woman’s heart with a single smile? The sexiest icon of all—a fireman!

With a list of award-winning authors that includes Ily Goyanes, Shoshanna Evers, Adele Dubois, and Rachel Firasek, Delilah delivers tales of these courageous men sliding down their big poles to steal readers’ hearts! Smokin’ Hot Firemen imagines the romantic possibilities of being held against that massively muscled chest by a man whose mission is to protect and serve…

Through the burned opening in the fence, Ronan eyed his grill-challenged neighbor holding a small kitchen pitcher. She stood in a short, pink silk kimono that barely covered her crotch. Long, wet hair dripped down both sides of the robe plastering the damp material to her full, lush body. When she turned toward her house to shush her dog, he got a nice view of the back of the robe cupping the globes of her rear and an erect nipple saluting him through the now almost transparent material. His cock sat up and took notice of her bodacious body. He adjusted the crotch of his cargo shorts.

Throughout the twenty minutes it took for his guys to put out the fire and complete the fire report, his neighbor kept tugging at the robe as though pulling the edges closer would somehow maintain her modesty. Instead each tug hiked the hem up a fraction of an inch. A couple of more and they’d all know if she was a natural blond or not.

Bree looked at her grill lying in the mud by the fence. Its legs collapsed, wet coals spilt in the black burned grass next to the remnants of the fence. Now that all the guys were gone, she had to admit, she was embarrassed. First by starting a fire that burned down the fence of a fire lieutenant, but then she stood in the yard with a group of fireman in a short robe that was stuck to her wet body like a second skin. She could have been naked in the yard and the men would have been able to see her body just as well.

“I hope you have insurance,” a deep male voice said.

Her gaze jumped up from the mess in the grass into the angry grey eyes of her hunky neighbor. Not the way she’d planned on meeting him but…

She flinched at the harsh tone in his voice. “Really. I am so sorry. I never dreamed that something like that could happen. I thought I was being careful to get the hot coals away from my house.”

He arched an eyebrow. “So as to only burn down your neighbor’s place?”

Heat flushed her cheeks. “I didn’t mean to burn down your fence,” she said defensively. When he didn’t reply she added, “I’ll make it up to you.”

“Do you have insurance?”

“Then it’ll replace the fence but that’s not the current problem.”

“My dinner is now overcooked and ruined.”

She cringed. “Please, let me do something to make up for this mess.”

“Really? You want to make this up to me?”

“Oh yes. Please. Nothing would make me happier.”

“Fine. You can replace my dinner. Tomorrow night. You cook at my house wearing exactly what you have on right now.”

Bree’s heart skipped a beat. Her pussy throbbed. Arousal trickled down her thighs.

He gave a careless shrug and turned to leave. “So you weren’t serious about making it up to me.” He took one step.

He turned and gave her that damned arched eyebrow again. “Take it or leave it, honey. Makes no difference to me.”

Buy it on Amazon

Cynthia D’Alba started writing on a challenge from her husband in 2006 and discovered having imaginary sex with lots of hunky men was fun. Her first book, Texas Two Step, released in 2012 to outstanding reviews, was a Samhain Publishing best seller. The second book in the Texas Montgomery Mavericks series, Texas Tango, will be released by Samhain Publishing in November 2013.

She has stories in two anthologies to be released later this year…Smoking Hot Firemen (Something’s Burning) in July 2013 and the Mammoth Book of Medical Romance (Wake Me When It’s Over) in the Fall of 2013.

She is currently at work on book 3 of the Texas Montgomery Mavericks series (Texas Twist) and novella.

She loves to chat online with friends and fans. You can find her most days at www.cynthiadalba.com or www.everybodyneedsalittleromance.com.

One randomly drawn commenter during the tour will receive a $50 Amazon GC.

Additionally, one each of the following prizes will be awarded to randomly drawn commenters during the tour on each author’s stop. All items that require shipping are for US winners only:

Adele Dubois will award a download of REV ME UP, plus a surprise giveaway the day of her blog appearance.

Cathryn Fox will award a download of Cowboy Way.

Elle James will award a book bag, books and swag

Tahira Iqbal will award a digital copy of The Collector

Shoshanna Evers will award an ebook of Enslaved, Book One in the Enslaved Trilogy from Simon & Schuster Pocket Star