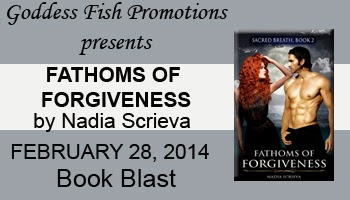 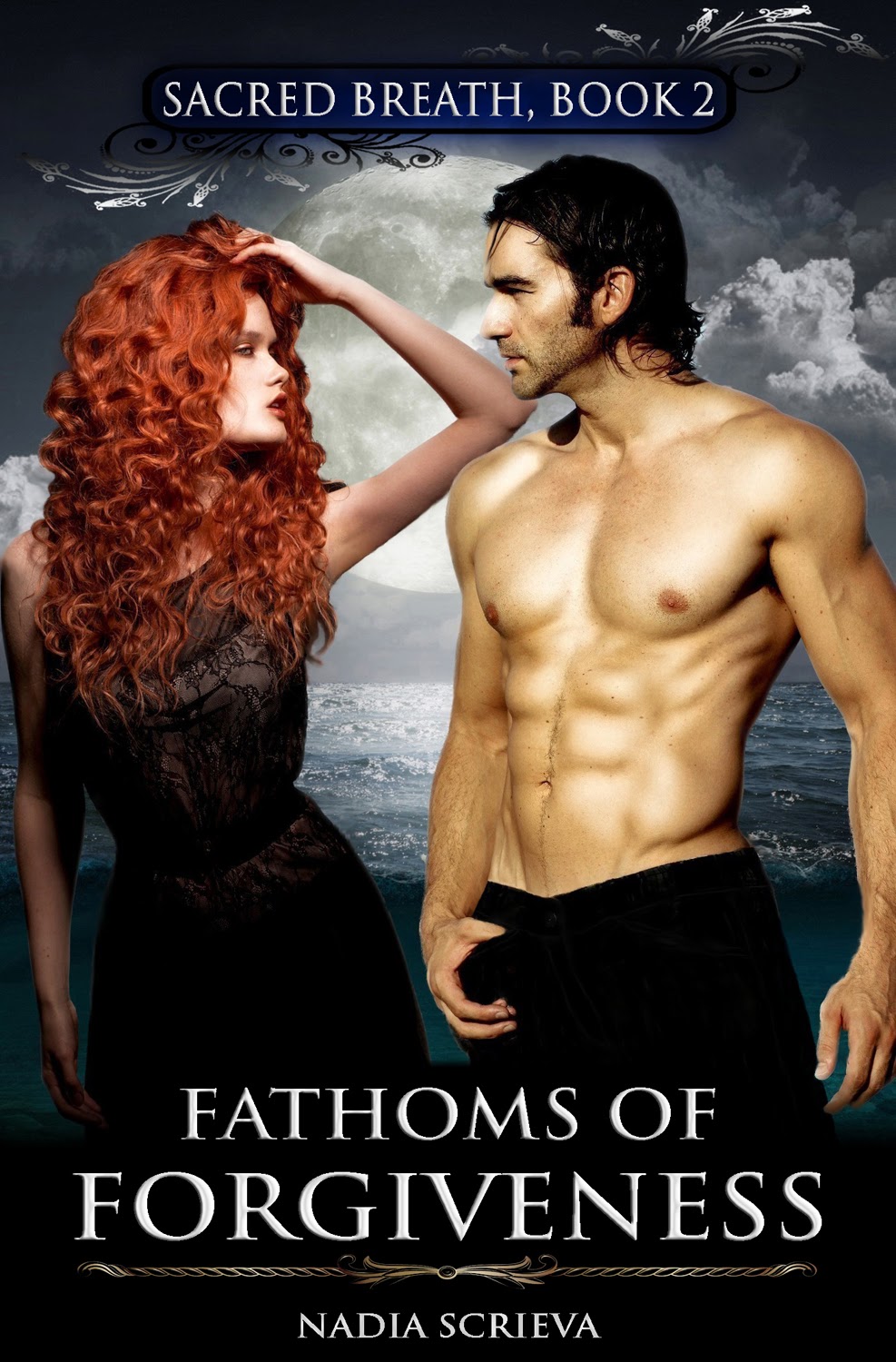 Fathoms of Forgiveness
By
Nadia Scrieva


Meet the brave and fearless Visola; a woman unlike any you've ever encountered. Her wit and humor take her through the darkest of dangers with a smile always on her face--and her smile only grows larger as the odds become more impossible. With no concern for her own safety, Visola dives headfirst into the throes of battle to protect the people and country she loves, even if it means facing her worst enemy--the one man who can get inside her head and break her down like no other: her own husband...

When Visola awoke, she realized with a start that she was not alone. The warmth of another body so close to hers had made her sticky and uncomfortable, and she was quite sure that it was not a puppy cuddled up against her back. No, as advertised, it was one of Aazuria’s half-naked, well-muscled, exotic men indigenous to the Southern Continent. She groaned, and slammed her elbow backwards into the man’s stomach, shoving him away from her with disgust. He hit the floor with a loud crash and an oof as the wind was knocked out of him. At least I have a story to tell Sionna when we get home, she thought to herself. She snuggled back down happily between the sheets. Then it occurred to her that she was no longer on the beach.

He hit the floor? Visola frowned and opened her eyes. She saw the wooden patterning of her bedroom wall on the ship. This confused her as she had not remembered returning to the boat. She had brought a Yawkyawk man back to the ship? What had she been thinking? What about Aazuria? Visola was reminded of the fact that she should never party, because she always partied too hard. Was it really worth ruining days or weeks of her life over one night of pleasure? Pleasure that she could not even remember, for that matter.

The man she had accidentally shoved off her bed made a grunting noise. She turned over to face him, and propped herself up on her elbow so that she could speak to him in sign language.

“Please leave my room immediately,” she told him. Even as she commanded this, she observed his features and physique. He was wearing trousers, but unclothed from the waist up; she was surprised by her evidently impressive subconscious taste. She kept her face stern, and did not betray that she found his appearance pleasing. “I was drugged last night, and I apologize for anything I said or did, but I do not remember any of it, and I did not mean any of it. You must leave immediately or I will employ force to remove you from my quarters.”

The man rubbed his head where he had hit it on the floor. “God almighty, are you always this grumpy in the morning?”

“I am not gru…” Visola froze. He had spoken in English. With a thick British accent. She noticed his fair skin and precisely groomed black hair which was swept back into a small curled tail. “You are not a Yawkyawk man,” she said slowly.

He nodded, closing his eyes and stretching sleepily. “I tried to explain that to you last night, but you were convinced that I was a bird.”

“You swine!” she yelled. She pounced on the man, and punched him in the face viciously. “You scoundrel!”

“Now hold on a moment,” he said, grabbing her wrists. He was surprised to find that he could not easily subdue her. “You’re being a tad judgmental.”

Visola straddled him and forced his hands above his head, pinning them there with one hand before punching him in the face again. “I was delirious! I was drugged! I expect you to know better—you are civilized!” Nadia Scrieva lives in Toronto, Canada with no husband, no kids, and no pets. She does own a very attractive houseplant which she occasionally remembers to water between her all-consuming writing marathons.

Nadia will be awarding the box set of Sacred Breath Series or the box set of Thirty Minutes to Heartbreak (winner's choice) to a randomly drawn commenter during the tour. Follow the tour for more chances to win!
Posted by Andi at 3:30 AM