Welcome to the review tour for Lost on the Road to Love by Kay Harris. It's the second book in the I Love Morrison series. This one picks up right where the first book, Don't Let Him Go left off in the epilogue. (You can read an excerpt and my review of that book here.) This second book does stand on its own, but you are going to also want to check out that first one. In the meantime, relax with an excerpt here, along with my review of this second installment. You can also leave a comment or a question for Kay. Then be sure to follow along the book tour for extra chances to enter to win the giveaway!

Note that affiliate links are present in this post. Should you make a purchase through one, I may earn a small commission to help support my websites at no additional cost to you. I also received a complimentary copy of this book in exchange for my honest review. 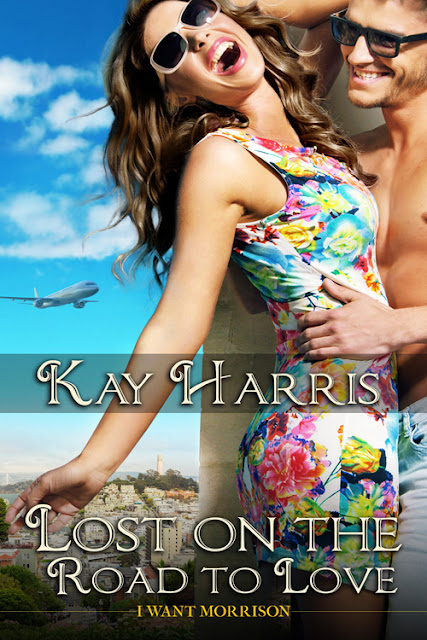 Lost on the Road of Love


On the road for eight months as part of the crew for a travel show, Chelsea Morrison expects to work hard, endure long nights, and enjoy some wicked adventures. But she doesn’t expect to fall head over heels for the show’s star.

Henry Rush, son of a legendary rock star, is leery of women. He learned early they only want him for the fame that rightly belongs to his father. But when an intense friendship with Chelsea leads to so much more, he has to confront the one thing he’s avoided all his life.

Can these two friends navigate their way to a happy ending?

“Let’s get out of here,” I suggested, scooting out of my side of the booth.

“Good idea.” Henry threw a few bills on the table, got up quickly and, to my great surprise, grabbed my hand and pulled me to the door.

We were moving fast as we approached the reporter and photographer. It wasn’t until we were squeezing past them in the doorway that the reporter spoke. “Hey, aren’t you—”

Henry ignored him and moved his large body so the photographer didn’t stand a chance of getting a good shot. Then, still holding onto my hand, he ushered me through the door and out onto the sidewalk. We moved swiftly away from the café, not looking back until we were almost a block away.

“Well done,” I said, slowly easing my hand out of Henry’s grasp.

Henry held on, giving my fingers a gentle squeeze. “I learned young how to evade the press.”

I looked at the buildings of Manhattan in the gray hours of early evening. The temperature was starting to drop, but it was still over seventy degrees, and for once, I was quite comfortable in my tank top and light cardigan. I had no qualms about making a long journey. “There,” I said, pointing at the Empire State Building.

I admit I was a little confused when I started reading this book. The story just dives right in to the present day and then quickly flashes back to when Chelsea and Henry met. The story then continues as snippets of memories of the development of their friendship as they work on the show together, interspersed with present day conversation as the two of them try to sort out their relationship. The consistency of those flashbacks (plus me finally remembering that this was the second book in the series) helped me to make sense out of it and I really got into it.

I think I liked this book better than the first one. I really like Chelsea. She is so down-to-earth, despite her wealthy upbringing. Of course, having gotten to know her beloved brother Jack in the first book, this isn't really surprising. She is smart and creative and determined to make her own way in life. That is very admirable, especially when she could have everything that she ever wanted given to her on a silver platter.

Henry is also quite likable. He also has had similar opportunities falling at his feet, but also wants to make it on his own. I still don't quite understand why he agreed to do this show, even though he tries to explain it. But I'm glad that he did, because that's how he and Chelsea met.

I really like the two of them together. They easily fall into a super close friendship, that of course develops into something more. Isn't that just what we all want in life? And while this book is short, it's not like they fell madly in love with each other at first sight. It felt like a natural progression in a reasonable amount of time. They left me feeling all warm and fuzzy inside.

This book also ends on sort of a cliffhanger in the epilogue that isn't a total cliffhanger. Our story comes to a satisfying conclusion, but there are strong hints of a third book to come, this one involving Jack and Chelsea's brother. I'm still a little mad at him after the first book, but I am guessing that he will redeem himself in the next one. It made for a lovely evening reading.

Kay Harris has had a diverse career with jobs ranging from college professor to park ranger. Now she adds author to her repertoire. Kay writes romance novels that contain a little bit of sweet, a dash of sexy, a touch of heartbreak, and a whole lot of fun!

Kay grew up in the Midwest and has since lived all over the western United States including Montana, Wyoming, Utah, Arizona, Nevada, and California. She loves to hike, is obsessed with museums, and enjoys taking her extremely tall and very handsome husband on adventures.

Kay Harris will be awarding a $25 Amazon/BN GC to a randomly drawn winner via rafflecopter during the tour.