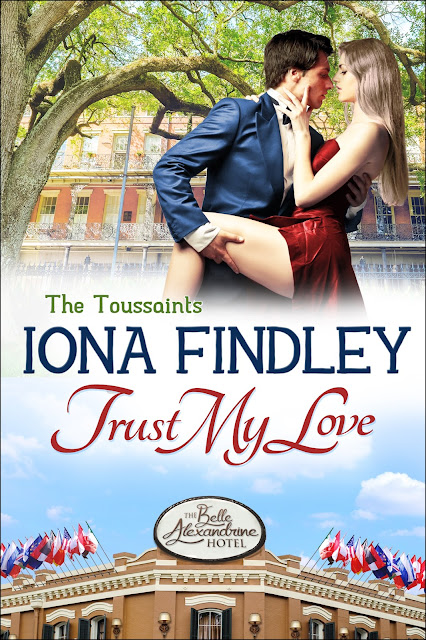 When a cop's family is threatened, nothing will stop him — not even a strange and secretive woman.

An innocent in jeopardy…

As the eldest son of New Orleans’ most prominent family and one of NOPD’s top Missing Persons detectives, Philippe Toussaint is no stranger to pressure. But when his only niece is abducted, he'll do anything to secure her safe return. With few clues and limited time, he seeks answers from every resource, no matter how far-fetched. Even going so far as to question the enigmatic and beautiful so-called psychic who shows up out of nowhere, shaking up not only the case but his feelings, as well.

Artist Claire Davenport escaped to New Orleans to outrun the pain and humiliation of her childhood, keeping to herself and never letting anyone too close, but when a frightened teen girl shows up in her dreams and her most recent paintings, she knows she can no longer hide. With her psychic ability now out in the open, Claire fears the ramifications. But it’s not only her secret in jeopardy, the influential and gorgeous detective on the case stirs things within her she never thought to feel and endangers her reclusive way of life.

Passions ignite between the two, but doubts on both sides threaten their relationship, and the case is only the beginning of their problems.

Philippe must protect the woman he’s falling for while convincing Claire that she can fit into his elite society life. All before betrayal and fear destroy their dreams of love.

Want a Contemporary Romance series which blends heartwarming love with family fun, suspense, and just a hint of paranormal. Read TRUST MY LOVE on Kindle Unlimited or buy it on sale now, and meet the Toussaints.

A wicked darkness penetrated the sprawling, dirty room, looming over the ornate ironwork bed and the huge antique painting on the wall. Slivers of light peeked in between the cracks of a boarded up window. Fear rolled off the young girl crouched against the headboard of the illuminated bed.
Her riotous, brunette curls tangled around her face, pushed to one side. Tears streamed down her cheeks as her right hand reached up to swipe them away while her panicked, tawny eyes blazed out through the room. She wore a white, wrap-around shirt, which gaped open where it was ripped and a streak of reddish brown tainted one sleeve. Blood?
Red satin sheets covered the bed and partially obscured her skirt and legs. The loud scrape and clang of the bolt sliding across the large metal door appeared to shatter the girl. He was back! The teen shrank back, trying to disappear. She trembled and shook and wriggled madly, as if she wanted to get away, but found herself pinned in place. With her eyes glued on the door she whispered, “No... Oh God...He’s back... no, no, no...” 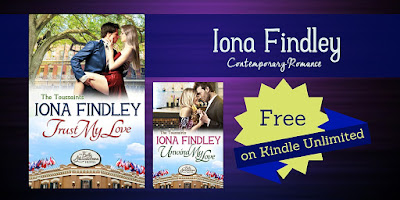 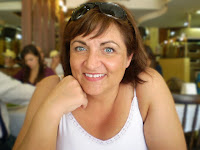 She now writes fast-paced, light contemporary romance: the kind that leave you hopeful and happy, the kind that are a little steamy and a lot adventurous, the kind about characters you want to cheer for as they make their own path to love.

Iona is the eldest of six siblings and the World's Greatest Auntie (it says so on her coffee mug). When she isn't writing she is the servant... er... mom of several bossy cats.

Iona loves to explore new places, and she draws upon her experience as a serial traveler for many of the settings in her books. When she can’t fit in an international trip, you might find her in New Orleans, soaking up the eclectic historical atmosphere of the French Quarter and writing her newest series, The Toussaints.

Get a free Series Starter at: IonaFindley.com/freebook/
Posted by Andi at 6:17 PM