#Review of the Sin & Honey series by Taryn Scarlett The Touch of Betrayal

For fans of Anita Diamant's The Red Tent comes the second novella in the scintillating SIN & HONEY series featuring the Bible's most powerful and seductive women...

So Delilah said to Samson, “Tell me the secret of your great strength.”—Judges 16:6 Delilah would do anything to escape her past.

Falling for Samson only got in the way.

Taryn Scarlett’s lush reimagining of Samson and Delilah uncovers the hidden truth behind the girl who became the most infamous seductress in history.

Delilah has come to the quiet valley of Sorek to start a new life, but when a man blackmails her with a devastating secret, she learns that not all sins can be buried in the past. In a dangerous bargain for her freedom, she agrees to seduce Samson, a notorious killer threatening the region—and if she can’t uncover the secret to his strength, she’ll forfeit her life.

But Samson is different than any man she has ever met before: godlike in his strength but guarding a passionate vulnerability that draws Delilah to him. Will she betray the man she has begun to fall for—or will she betray her own heart for freedom?

I loved this book so much more than the first one in the series. This one read more like a contemporary romance, without losing the historical aspect of the story. It made it more palatable to me, as I am not often a big fan of historical romance.

The story of Samson and Delilah is one that we learned about when I was a kid going to Sunday School. I don't remember a lot of details about it, but did remember the gist of the story. Back then, I never would have thought about what would attract the two to each other. I didn't really understand what it meant to be seductive. Biblical characters having sex just didn't seem like something that would happen. It is almost like imagining your parents having sex. You know it happened but don't want to think about it.

I also love how this book really gets into Delilah's motivation behind her actions. You learn more about her past and really get into her head. You can feel her conflicted emotions about what she must do and what she ends up choosing to do. You even get more of a sense of who Samson was as a person, instead of this idea of some random man with superhuman strength. I will say that I would have loved to have known more about his past, though. I am aching to go back and read the biblical story, just to compare the two, and to see how I feel with some more insight into what could have happened.

So, now that I have read the first two, I definitely want to continue reading the series and see how else Taryn imagines the past.

I did receive a complimentary copy of this book in exchange for my honest review. All opinions are 100% my own.


Get the first book free on Amazon 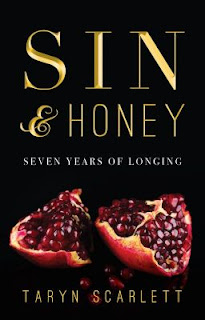 Featured on Cosmopolitan.com, the new series SIN & HONEY stars the Bible’s most powerful and seductive women and is perfect for fans of Anita Diamant’s The Red Tent.

So Jacob served seven years, and they seemed to him but a few days because of the love he had for her. —Gen.29.20

Rachel was destined to love at first sight.
Leah’s only crime was falling for the wrong man.

Taryn Scarlett’s richly lyrical novella reimagines the classic story of sisters Rachel and Leah, torn apart over the same man. Or so history would have you think.

While Rachel has sworn her love to Jacob, Leah has in fact been carrying on a scintillating affair with a foreigner whom she is forbidden to love. When Rachel discovers Leah’s dark secret, the sisters’ faith and friendship are put to the ultimate test, especially when Rachel is given an impossible choice: in order to save Leah’s life, she must give up Jacob forever.

This is an ADULT story intended for readers over 18.

To me, this was a typical historical romance. I will be honest and say that it is not my favorite genre, but I do like to broaden my reading horizons to keep it all interesting. I find that a lot of historical fiction seems a bit passive in its telling as opposed to making me feel like I am a part of the story. I feel more like an observer instead of a participant. I can say that this is rectified in later installments of the series.

At the same time, I found the story absolutely intriguing. I don't remember much about Rachel and Leah's story from the Bible, so it felt like a new one to me in some ways. I can't imagine the torture of having to wait seven years to marry the man I love. I can't imagine having such a domineering father who runs every aspect of my life. I can't imagine the level of betrayal that the family secrets reveal.

I love the bond that the sisters share, despite their differences. I admire their men for standing up for them. And now I want to go back and reread about them in the Bible, to put together more of the story. I also know that I will want to read the other stories that will be coming out in this series. I find the reimagining of these stories to be quite interesting, as you know that those people had real lives. We just got the filtered version in Sunday School classes. Taryn Scarlett holds a B.A. in Theater and English with a concentration in Creative Writing. Her weaknesses are chocolate, floral sundresses, soapy TV dramas, and anything purple. SIN AND HONEY is her first series. You can visit Taryn at www.TarynScarlett.com.

Find the author on:

a Rafflecopter giveaway
Posted by Andi at 9:08 PM